May the 4th Wedding!!! If you are a Stars Wars fan you will totally understand this. If not, here’s a hint. May the 4th = May the force… The next question was how to decorate a May the 4th wedding? You will need black lace and lots of it. I didn’t really have to think about it too much because they already had a plan. All I had to do was look at their Pinterest board and go from there.

I was a little worried about the extent this would go. Storm Trooper best man? Would I have to dress like–I don’t know who? If Hubby was still alive he would have been tall enough to be Chewbaca.  It wasn’t like that at all. 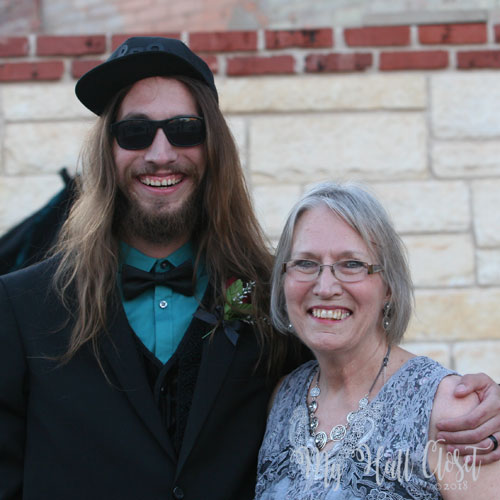 It was just a couple of months ago that they announced to me that they were getting married. I was so excited for them and for me. Baby Bird had left the nest (again-3rd time) in the fall. His Lady has touched his heart and put a smile on his face. That makes my heart glad, too. 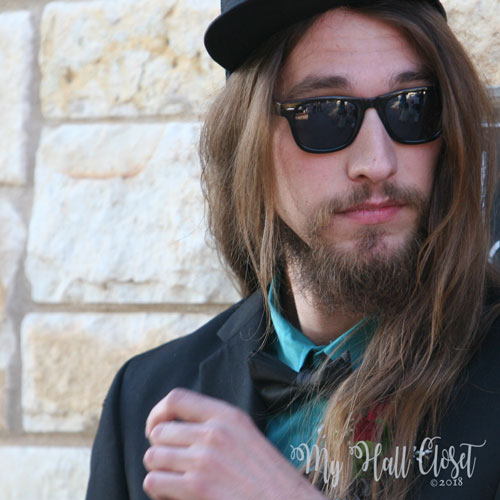 When they told me they were getting married, he was ready to get married that day but she wanted a “WEDDING”. They talked about October, 7 months away. He didn’t want to wait that long so he suggested May the 4th. Just so you know, in our world that is not May 4. It is May THE 4th. He told her that if they had a May the 4th wedding he would never forget their anniversary. 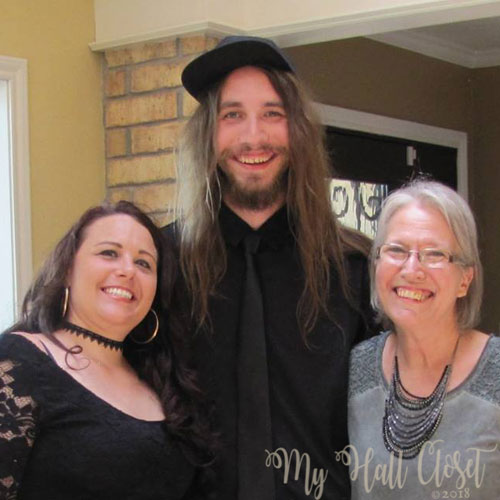 My sweet girlfriends hosted a wedding shower for them that they were not expecting at all. It was such a blessing to see how grateful they were for everything that they received. So much of the time with Millennials there is so much entitlement and not much thankfulness. 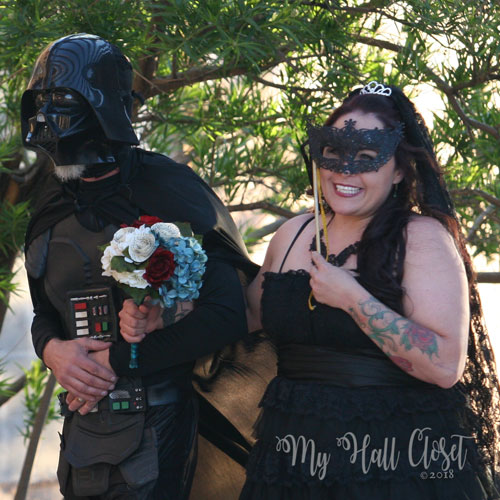 His Lady decided on a black lace dress that we found at Goodwill. They love to thrift shop. That sure makes it a lot easier when you are on a budget. We added a couple of layers to the back of the dress. It was kind of like a short layered train. It was really cute.

Her dad is also a Star Wars fan and he just happened to have his own Darth Vader costume. I love his white beard peeking out from under the mask. 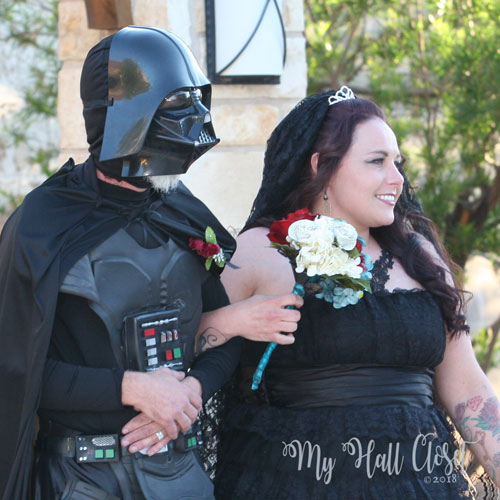 They were so cute. The weather was perfect, too. Since it was an outdoor wedding, that could be a cause for concern in West Texas. But it was awesome. There was a little breeze, the sun was going down and it was 78 degrees. 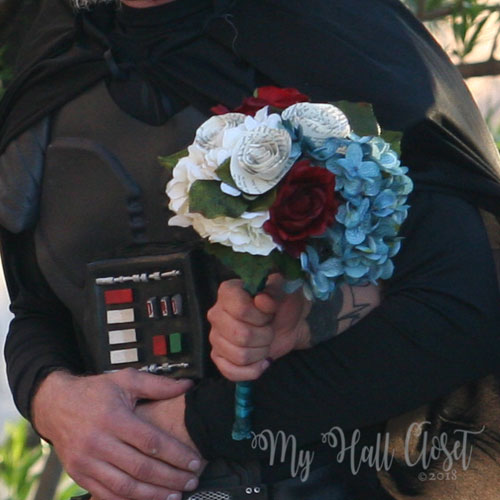 The main decorating theme was Bohemian Gothic. Being a product of the 60’s I knew Bohemian. And I knew Gothic and really didn’t care for that. Especially the skulls and death stuff. But for their wedding, the gothic part was more in the colors black, and burgundy. 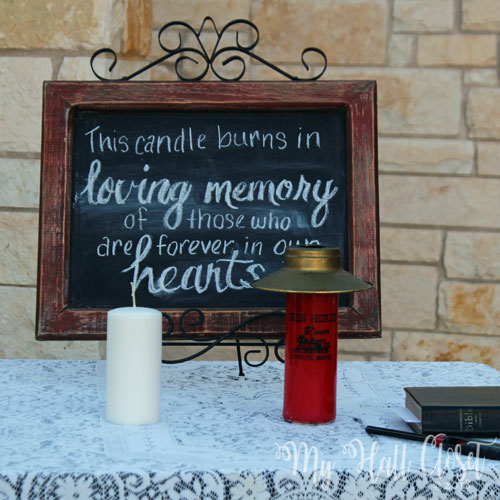 In 1972 we met in the Iron Horse Room at the Starlight Inn. I was a cocktail hostess and he was a customer. The real story that he would tell was The Iron Horse Room was a bar. I was a tavern wench and he was a drunk. That just pretty well described us back then. And to use a Star Wars quote, “A long time ago, in a galaxy far, far away…” That was a lifetime ago and that was a lifestyle that thankfully didn’t last that long. But that’s another story for another time.

I was so glad that I still had that candle from that time and that place. The other special thing was that Hubby’s sister recognized the candle from there. And we used the white candle for her Grammy. 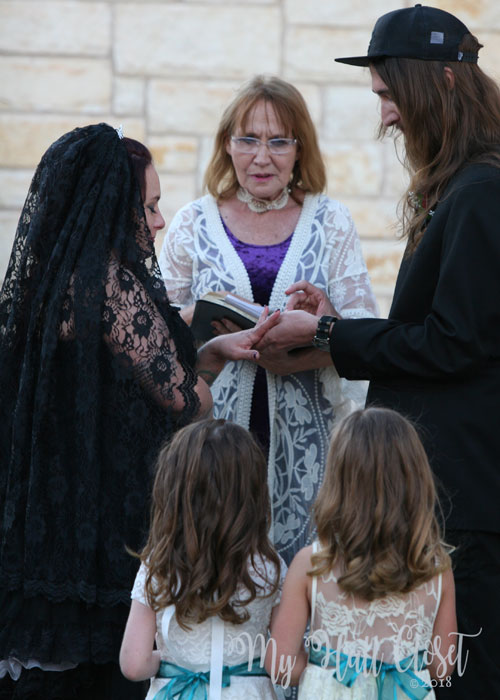 My sister is an ordained minister of the Gospel. They requested for her to officiate the ceremony. Their vows were traditional vows. But she did ask the father of the bride, “Are you her father?”

The little girls were her bridesmaids. I made WRIST CORSAGES for them. Here is a VIDEO. 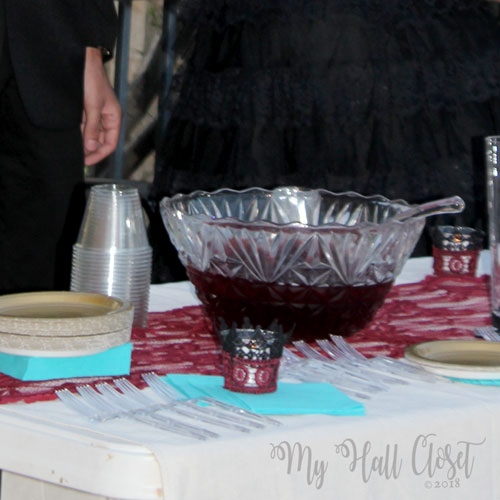 Back to the decorating. His Lady wanted burgundy punch but wasn’t sure what recipe to use. If you haven’t figured out by now sometimes I really like cheap, fast, and easy. But it also needs to not look or appear that way. I assured her that I had an easy, delicious punch recipe that would be that deep burgundy color. We made this right at the table since there was no kitchen area for prepping.

Put a little bit of ice in the punch bowl. Sprinkle Crystal Light over the ice. Carefully pour the 7-Up over the Crystal Light and the ice. Mix, add more ice to fill the bowl, and serve. So yummy!!! 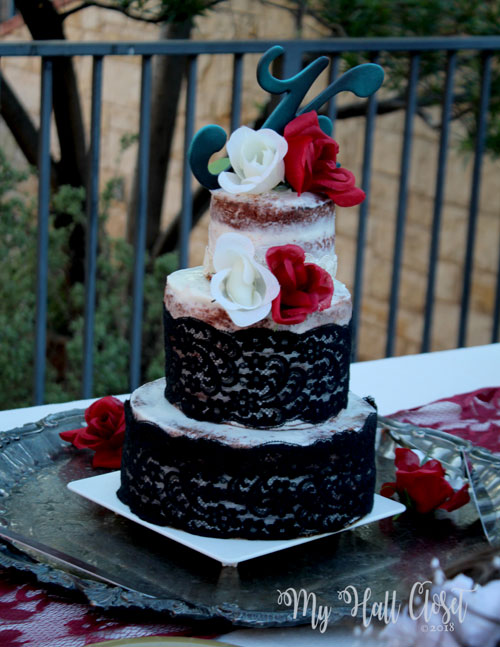 She made a Red Velvet Naked Cake. Her mom decorated it. You might be like me in the fact that I had not heard of a NAKED CAKE. I found out that it is not just a trend but is now considered a bakery staple. Why naked? It is because there is just a smear of icing on the outside of the cake. You can see the layers. So if you have stressed over being able to frost a cake, here is your solution. Her mom added a few silk roses and she wrapped it with some of the black lace. There was a lot of BLACK LACE. 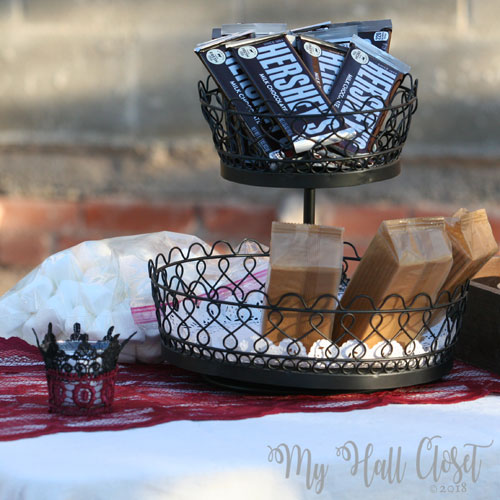 The tables were covered using painter’s drop cloth and burgundy lace runners. Also on their Pinterest board was a S’Mores bar. I didn’t have a good photo of everything out of the packages. The marshmallows are in the bag right behind the display. We used an old drawer and 4 sterno pots and filled around the pots with gravel and a few teal jewels. The S’Mores bar was a huge hit! 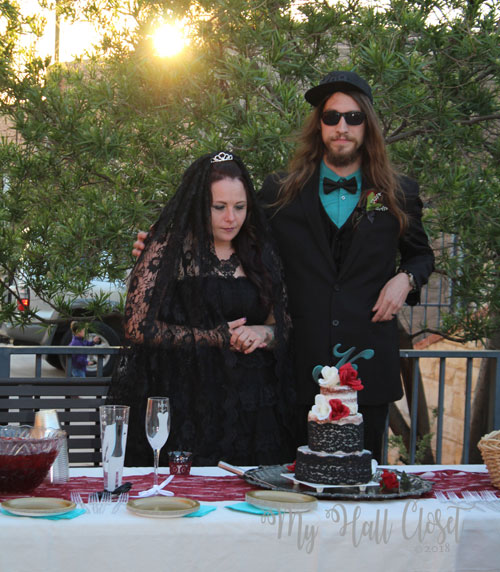 Maybe you have found a little inspiration and just a few ideas on the off chance that you were wondering about how to decorate for a May the 4th wedding. And even if it’s not a Star Wars/ Bohemian Gothic wedding all you have to do is go from black lace to white lace, and change the Crystal Light Raspberry to Crystal Light Peach Tea, leave off the Darth Vader costume and you can have a nice traditional wedding.

Ephesians 5:31-33 “For this cause shall a man leave his father and mother, and shall be joined unto his wife, and they two shall be one flesh. 32 This is a great mystery: but I speak concerning Christ and the church. 3 Nevertheless let every one of you in particular so love his wife even as himself; and the wife see that she reverence her husband.

And I love this one. Think about it. God had just put Adam into a deep sleep and created Eve. There were no father’s and mother’s when He told them this.

Genesis 2:24 “Therefore shall a man leave his father and his mother, and shall cleave unto his wife: and they shall be one flesh.”

« How to Make Shabby Flowers – Use Old Lace, Linens, and Buttons
Closet Cleanout Challenge – Just 30 Minutes at a Time »