Life is a beautiful ride even if you get a little sidetracked. The bend in the road or the unexpected detour may actually be God leading you in a whole new direction. Don’t think about it as sidetracked, think about it as the “scenic route”. And not all who wander are lost or maybe they are, especially if they forget to take an old-fashioned paper map along on their trip.

East Texas is familiar territory to me or it was familiar when we lived there 40 years ago. It had been a year and a half since my last trip to East Texas. So it was time for another road trip. And I still forgot to get a map. I am going to have to remember to get one. 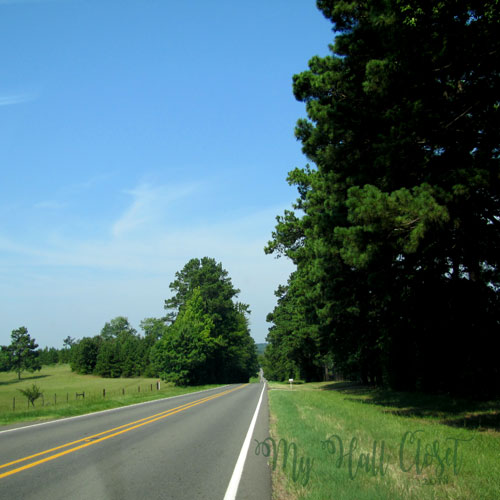 When we journeyed to East Texas 18 months ago little did we know that it would be hubby’s last trip East. On that trip, we stopped at Buc-ee’s for a potty break. We were amazed!!! There were plenty of bathroom stalls and they were spotless. The gift shop was over the top and the snacks were abundant. I planned to stop there again. 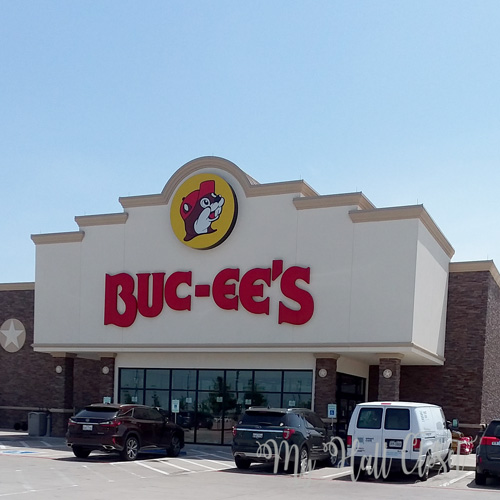 Buc-ee’s in Terrell, Texas was on my very short list of stops. I was not sight-seeing or junk hunting, this time. I was headed to see my good friends in the middle of the Piney Woods of East Texas. Buc-ee’s is right on I-20 so chances of me getting lost or sidetracked were pretty slim this time. 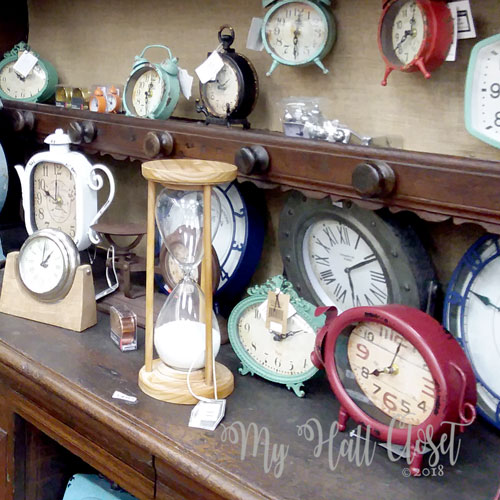 As I cruised through the gift shop I spotted these reproduction vintage clocks. Time!!! Almost all of the clocks were set at different times. And then there was the hourglass. I love clocks and especially vintage clocks.

Time is the most precious commodity! It is a gift from the Father.

“Yesterday is history, tomorrow is a mystery, today is a gift of God, which is why we call it the present.” ― Bil Keane

Do you take time or make time? Take or make, it sounds about the same but it is a matter of perspective. “Taking the time” sounds like an obligation or a sacrifice. But “making the time” feels like you are carefully creating the time to either do something that you love or to be with someone you care about.

Recently, I have been learning how to take the time to make the time. It is a moment by moment decision.

For the last 10 years, it seems like I have been so busy and I rush from one thing to another. Hubby and I would be in a check out line at the grocery store and the cashier would apologize for it taking so long. While I would impatiently pat my foot, but he would say, “That’s okay. I’m not in a hurry! I have the rest of my life.” He lived in the moment. He made time to visit with people and hear their stories. I was always about “doing” and he was always about “being”. 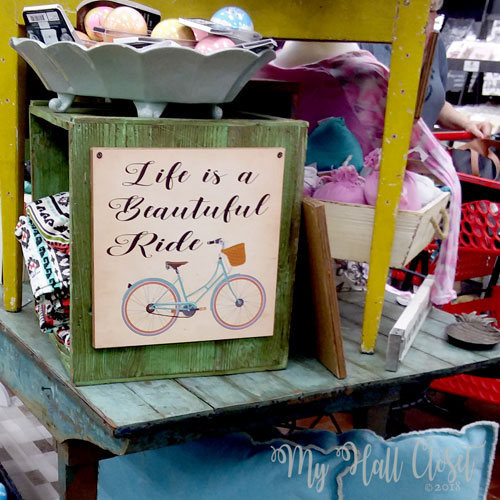 During his last year, I slowed down as Hubby became my focus. Painting watercolors, teaching art classes, and Tuesday lunch with my Godly girlfriends offered little breaks in his caregiving. Hubby had been diagnosed with vascular dementia and my sweet easy going life partner changed. He would get angry about his memory loss and frustrated with his limitations because of the carcinoid tumors that were taking a toll on his body.

Life is a beautiful ride. We were planning on much more time together. Our beautiful ride just took an unexpected turn down a very bumpy road.  but we were not on the journey by ourselves. Jesus was our constant hope and strength. And we had an army of prayer warriors surrounding us and encouraging our faith. We were blessed with MANY strong and faithful friends.

Mila is one of those friends. And we had the rare treat that our hubbies were also friends. Mila and I met when we were both pregnant, 40 years ago. She was our Lamaze coach. Her daughter and our son, the Guitar Guy were born 3 weeks apart. We grew in the Lord together through Bible study, prayer, and fellowship. We ate together, sang together, cried together, laughed together, and shopped together. And I was taking the scenic route to their house in the woods.

Sometimes you just need to leave the main road and take the scenic route. That’s exactly what I did going to East Texas and leaving there to come back home. I didn’t take the time, I made the time for the scenic route. The narrow two-lane roads and stately pine trees brought back a flood of memories. I was so thankful that Hubby and I had made this trip one last time before he left.

During my stay at Mila’s home, there were no deadlines or schedules, no alarm clock and no alarm cat (Kitty No), no television, only peaceful walks, some cooking (Recipe for Tomato Pie) and lots and lots of talking.

One of the signs of real friendship is that you can pick up the conversation right where you left it, whether it was last week, last month, or last year.

After my road trip to the Hill Country, I purchased a telephoto lens for my Canon Camera. It was time to try it out.

Gene feeds the birds every morning. 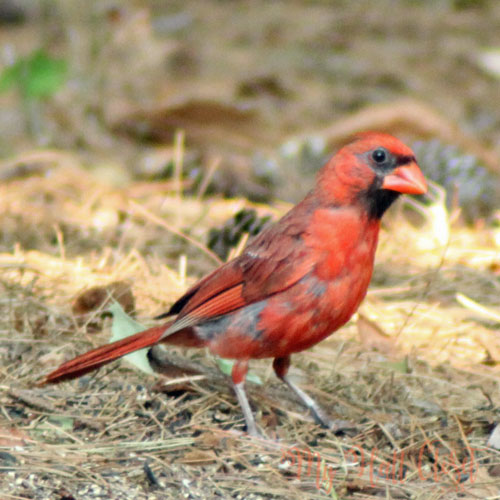 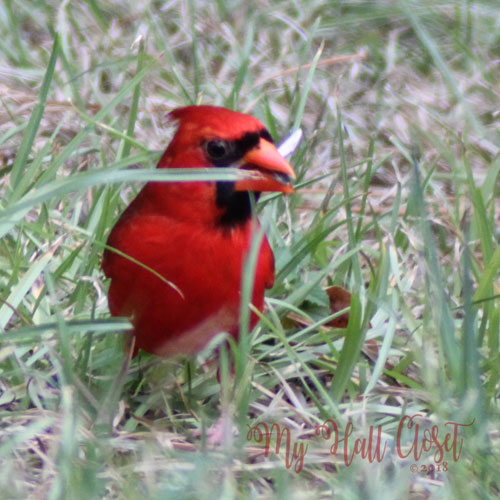 And every morning at the feeder I saw cardinals, bluejays, woodpeckers, doves and even an indigo bunting.

It was so frustrating mess with the lens, the settings, and an uncooperative tripod. Then, Gene asked if I wanted to photograph some teeny, tiny iridescent flies that were on a fern. Change lens – off with the telephoto and on with the Macro lens. I set the camera to macro, also. That was not quite as frustrating. 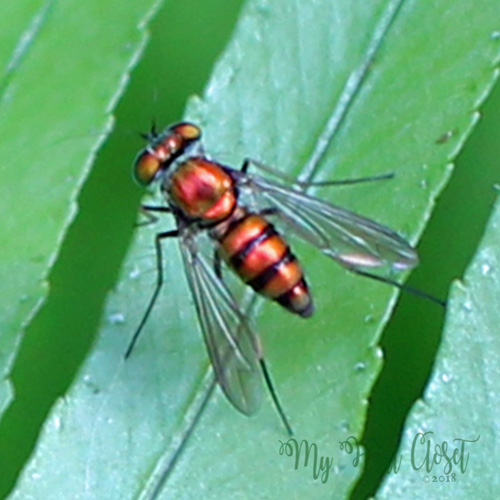 He had to almost touch them for me to see them. They were very small. 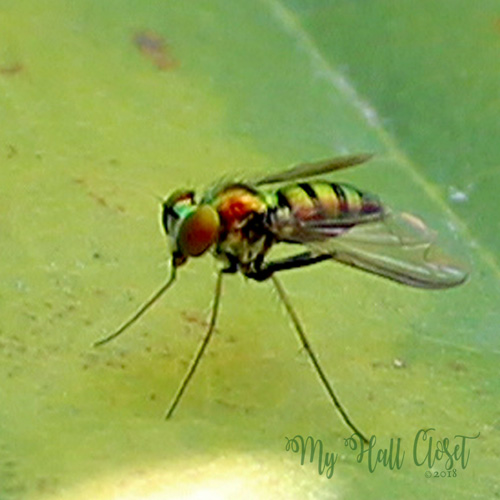 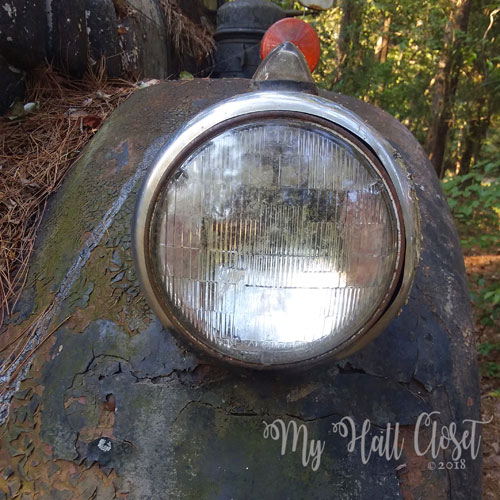 With camera in hand, I took a little stroll around their property. This old rusty truck didn’t hop or buzz or fly around. 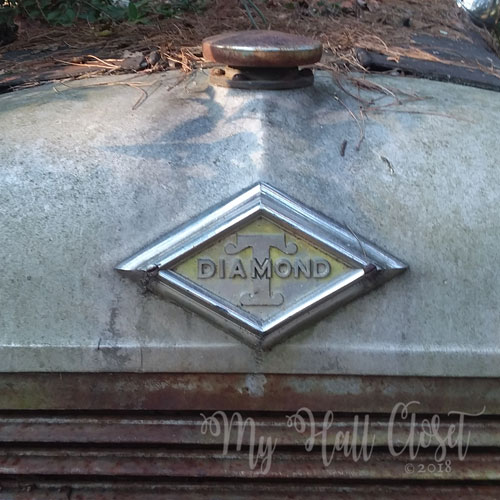 It was so much more fun for me to photograph these rusty treasures. Then, I wandered over to a little stand of trees in front of the trailer house where we had spent so many evenings together. Years ago there was a grill and some chairs in the midst of those trees. The men would discuss wood cutting, oil field, and deep theological truths while they were grilling. Meanwhile, Mila and I were preparing a dessert or some other delicious concoction in the almost not quite big enough kitchen.

I knew what I wanted to do. On the second evening during this visit, Mila had invited another couple, also, dear friends from our time in East Texas. Blu is a retired Methodist pastor and his wife Lynne is a very talented musician and quilter. 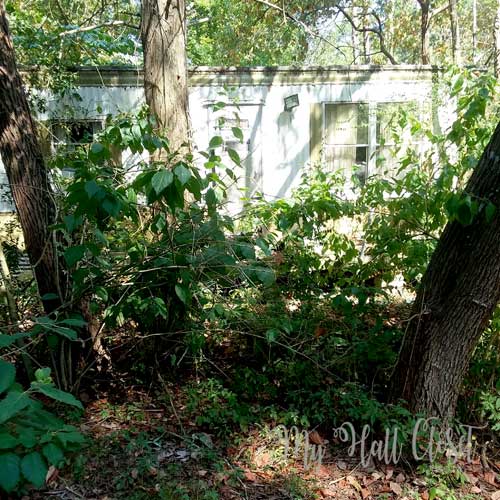 During their visit and after our supper, I asked if we could take some of Hubby’s ashes and sprinkle them at the base of those trees. It wasn’t formal and it wasn’t sad. It was just a quiet, sentimental time. We made the time to be together, again and we made the time to remember Joe.

Slow down. Take the scenic route. Make the time and take a chance and take the road less traveled.

Life is a beautiful ride!

“Blessed are those whose strength is in you, in whose heart are the highways to Zion. As they go through the Valley of Baca (the Valley of Weeping) they make it a place of springs; the early rain also covers it with pools. They go from strength to strength; each one appears before God in Zion.” Psalm 84: 5-7