The thought had crossed my mind about installing subway tiles when I started this bathroom project but then decided on 12″x12″ tiles. It didn’t take much persuasion to get me to change my mind and purchase the cute little 3″x6″ white ceramic tile. These tiles were easy to install. But because they are smaller it just took about 3 times longer. 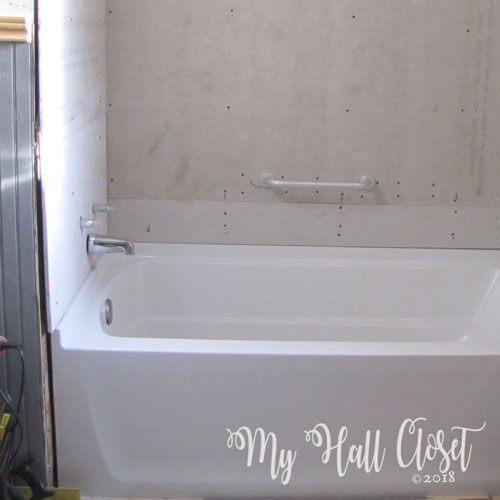 An article from This Old House states, “…subway tiles made their debut in New York City’s subterranean train stations in the early 1900s, they captured the public’s imagination and quickly moved into the bathrooms and kitchens of prewar houses for both practical and aesthetic reasons. Easy to clean, stain resistant, and light reflective, the 3-by-6-inch glazed white rectangles epitomized what those rooms could and should be: sanitary.” 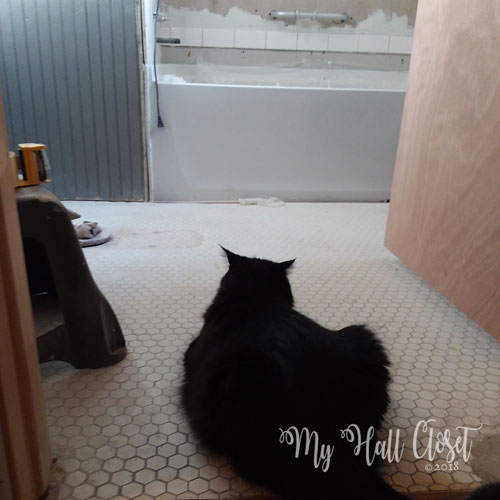 Kitty No is patiently waiting for the first row to dry

Step One: Waterproof the Hardi Board seams and corners

Step Two: Install a ledger bar to set the first row of tile on.

Here is a  VIDEO I made for you on how to Install Subway Tile using a ledger bar to start. I learned the hard about using a ledger bar when I tiled our other bathroom 10 years ago. That was the only time in my life that I did throw in the trowel, so to speak. And that is not a typo. Just FYI they don’t show that little tip on any of the remodeling TV shows. I was so frustrated. But, then I decided that I was smarter than the boxes of tile and figured out how to do it.

I”m not sure what happened to my photo of the ledger bar in place but you can see it in the video I mentioned above.

Step Three: Use a tape measure and find the center on each wall. 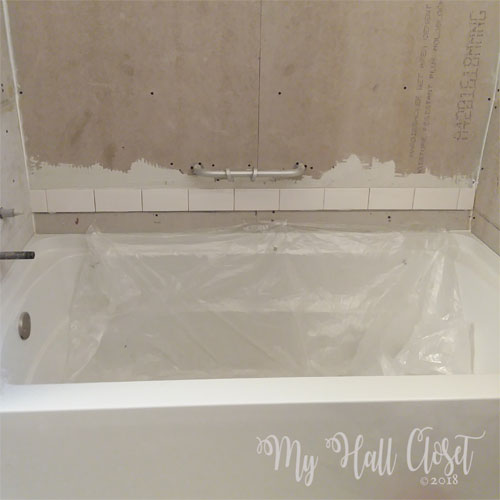 Because this my home is an older and not exactly straight or square anymore, I also used a level to mark a straight line (vertical) from top to bottom on each wall.

I don’t have step by step photos for this so the video will help explain some of this.

Step Four: Mark a handful of tiles at 3″ (halfway). This will be your center mark for every other tile lined up on the vertical center line. 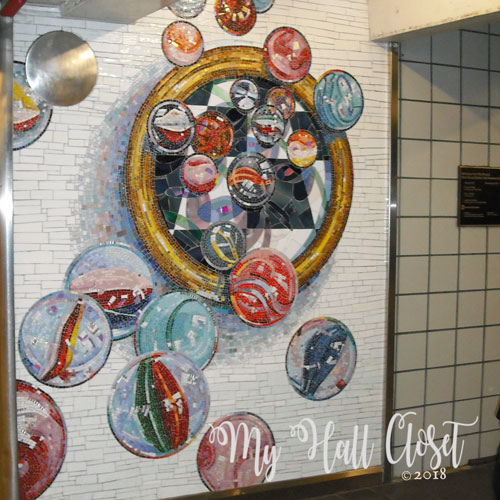 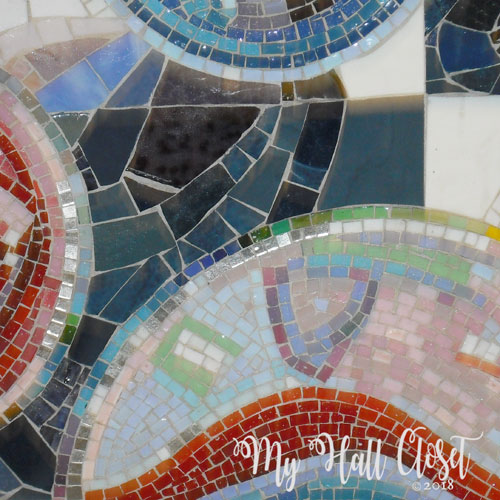 And a really amazing mosaic. Here is a closeup of the piece. Now back to the project at hand!

AcrylPro Ceramic Tile Adhesive was used the adhere the tile to the Hardi-Backer. I started with thinset then decided to use the premixed AcrylPro. That was much easier for me to work with. I used a 1/4″ grooved trowel to apply the adhesive.

Step Six: Start in the middle of the wall setting the first row of tile on top of the ledger bar and lining up the first halfway (3″) mark to the vertical mark on the wall.

Set tile to the edges of the wall and measure for the length to cut the tiles to finish the row. Do this for the other 2 walls.

Using a ledger bar is the best way to support the first row of tile. 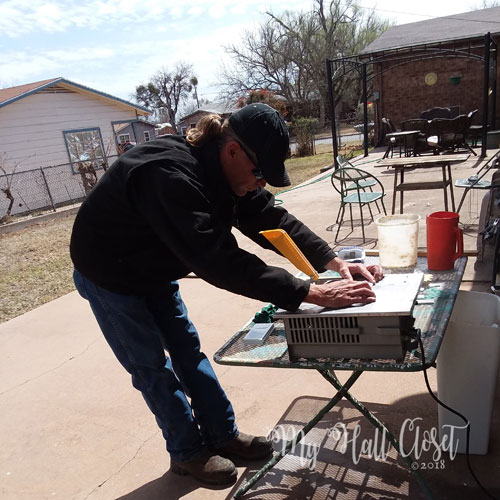 As the job progressed, The Guitar Guy was a huge help on this project. I would measure and he would cut while I set more tile in place. Di you notice that he is behind the tile saw? He didn’t want the water spray to get on his jacket.

Setting the next rows of tiles. 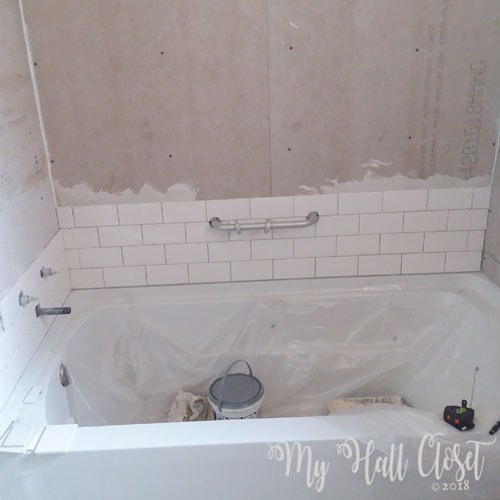 You will see that we added a handrail. We also took out the original 28″ door and set in a 32″ door. This is not for me (I hope) but maybe a future homeowner. 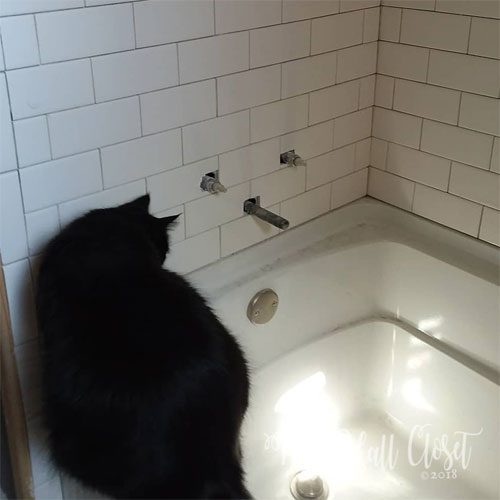 She is still waiting. It has been so funny to watch her with this process.

Apply enough tile adhesive to get you going but not so much that it will dry out before you can set the tile.

I hope that makes sense. It may take you a bit to figure out the number of tiles and amount of adhesive that you can work with at a time.

Line up one of the halfway marks with the space between two tiles that are already set.

Don’t forget to use your spacers between the tiles. 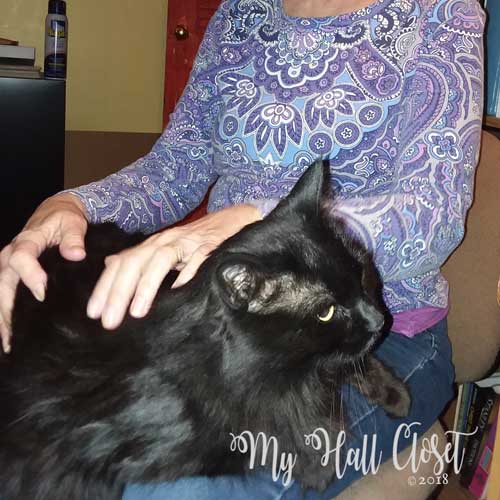 As the project began that was when Kitty No was the most stressed.

Demo Dude’s mom had just gone for some much-needed self-care for herself. A pedicure was a relaxing break for her. Then she came to visit and see the bathroom progress. She decided that Kitty No might just need a pet-i-cure, a relaxing break. 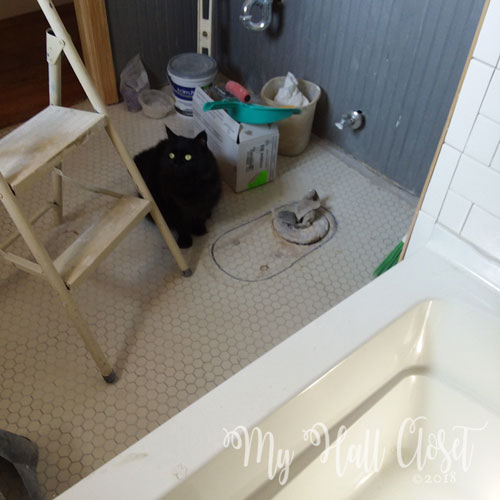 Let the tiles set up overnight or according to the package instructions.

This tile project took a lot longer than I thought it would but I really think that it is worth the extra work. I am so glad that my sidekicks, Melissa and Jackie talked me into using subway tile. Because my SHABBY, CHIPPY CABINET now had a beautiful black granite top, the sidekicks also talked me into charcoal grout! 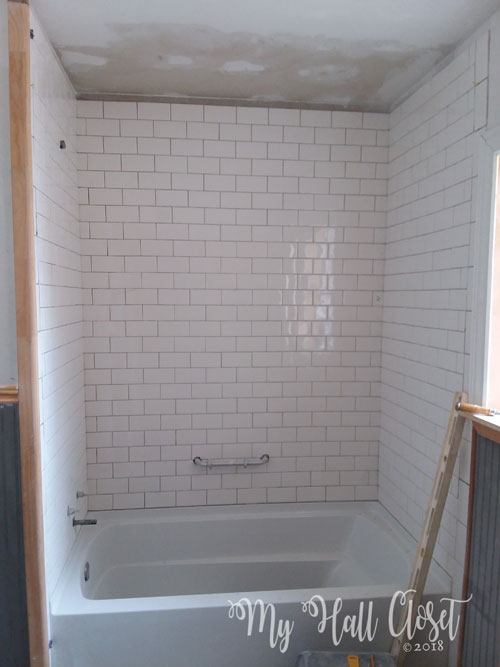 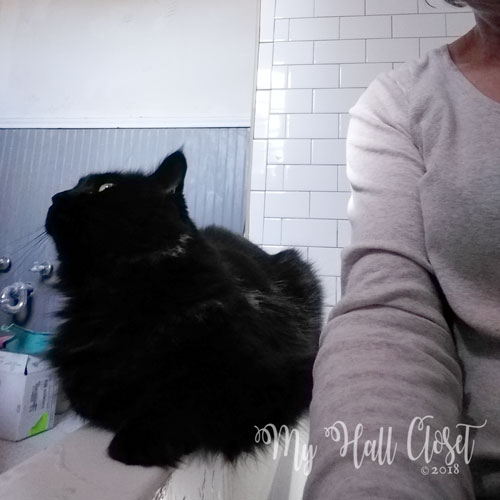 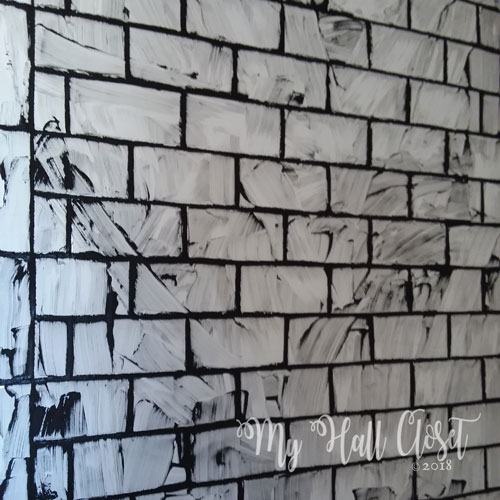 Mix the Polyblend Grout according to the package instructions.

PolyBlend Grout is a polymer-modified, cement-based non-sanded grout designed for highly glazed or polished tile, marble and natural stone that would be scratched by sanded grouts. This durable, non-shrinking grout accommodates joints up to 1/8″. 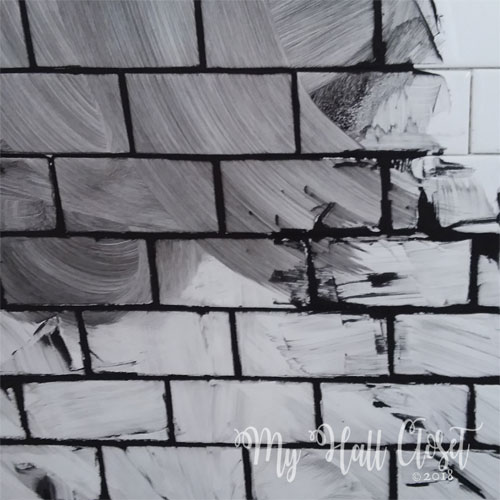 Again, using the instructions on the package I started to smooth and clean the grout off the tiles. I made another VIDEO for you about this process. 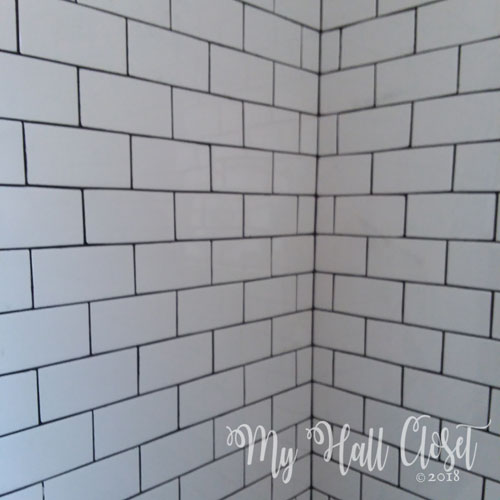 If I have learned anything during the last two months it is that the “PROCESS” is oftentimes hard, stressful, challenging, and messy. Process – a series of actions or steps taken in order to achieve a particular end.

It was tempting at times to want to toss in the towel and give up. There were a few disappointments and frustrations along the way. The Demo Dude and I both cried a little but we laughed a lot more. The good results far outnumbered the frustrations. The tiny glimpses of what the final results would be were so encouraging. We have made a lot of “PROGRESS”. Progress – forward or onward movement toward a destination.

It is almost finished. Breathe! I can breathe and Kitty No can purrrr!!!